Download Add to Lightbox Add to Cart
Image 1 of 14
Olympic-Animal-Sanctuary-Ducey-304.jpg 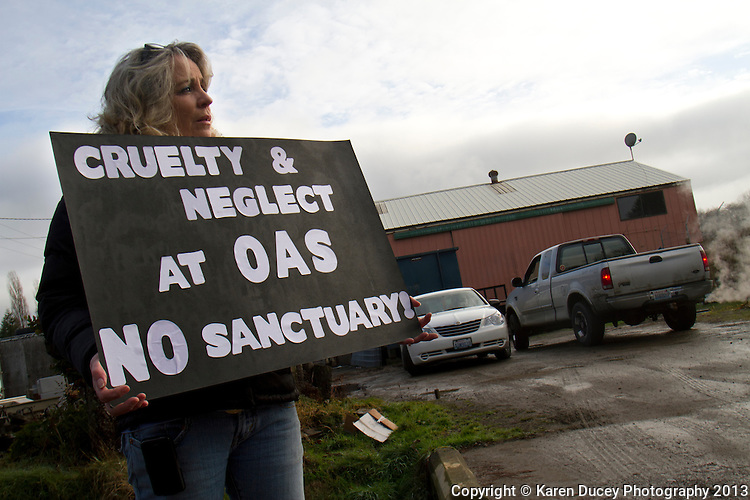 Therese Hitesman Kranz left her home at 5:00am and drove four hours to get to the Olympic Animal Sanctuary in Forks, WA "Because I think the dogs deserve to have a voice." she said on December 16, 2013.

Upon her arrival Hitesman Kranz says it was totally quiet but the dogs started barking when a couple of cars, including Markwell's pulled up. No one went inside for almost two hours and no dogs went out side all day she observed. Despite recent reports Markwell offered all his dogs to one sanctuary, Best Friends Animal Society, Hitesman Kranz says "I don't believe for a second that anything is happening here." She believes his real motive is to take the heat off him and put it on Best Friends. “If he wanted to get those dogs to help and safety it would have been done already.” She encourages more people to come out and protest. “Even if it is just one person it matters. It upsets them that people are there.” “Because look everyone is saying "Its over!" she said referring to recent news stories and social media postings. However, “There’s been no movement at the facility and there’s been no transparency. Now the public thinks its over because that’s what they want to believe. Nobody wants to think those dogs are still suffering. But in reality the dogs have not been saved. They are still suffering. The fight is not over.”Therese Hitesman Kranz is the fou
© Karen Ducey Photography 2013
Olympic Animal Sanctuary