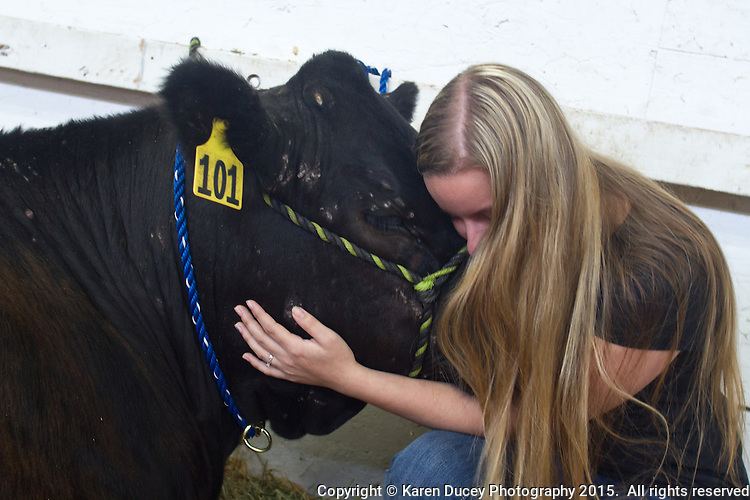 Alie Kale, 19, from Tahoma, Wash. has raised Stockey, a 13 month old steer since last summer. "He's very stubborn." she says. He is currently 1,200 pounds. When she first got him he was 300-400 pounds.She showed him at the Washington State fall fair. He was born on March 19, 2014 and she got him in April 2014 while in her FFA class at Tahoma High School. She sold him at the fair in September 2014 for $800 to Chase Smith, 18 from Fife high School. He got sponsorships from several businesses to help for the cost of food and showings. Smith worked with him for 2 -3 hours a day for about 5 months including baths, walking him "Its a lot of hard work." he said. He shared responsibilities with another student - he fed him in the morning at the Fife FFA barn

Kale says she wants to be a farmer. "I'd never touched a cow before." she said "I was completely in love. So now I'd really like to have a cow and a pig farm."

She says of Jim Roxstrom "He took a city girl and made a country girl out of me."Says Smith "Somebodies got to do all the dirty work and the other person on the other end gets all the money."

"I'm going to miss it." says Smith who lives in a condo. "I don't like condos, apartments or the city." The FFA barn is close by. From Fife.

Smith said he would make a little money due to Les Schwab who bumps everyone's price up.

About sending him to slaughter Kale said "They always know. he knows." "He's sad. You can see it in his eyes." "Everyone underestimates cows. They're like big, powerful dogs. If you train them they're really great animals to have." "He loves having the spot under his chin scratched . "she says.